Posted at 08:24h in Strategy by maadicadmin 0 Comments
0 Likes

Leadership as a tool of strategic management

Purpose of the article: The global economy and the worldwide trends bring new challenges permeating the corporate life. Along with the changing economic paradigm, the political and economic uncertainty brings about an increased demand for corporate leaders with visions and authority. Methodology/methods: the paper is based on comparative analysis and definitions of the state- of-the-art theories of leadership such as transformational, and spiritual. The analysis is followed by the historic case study of a successful model. This historical comparison is of importance for creating and developing present theories. Scientific aim: The paper aims to present the historical views on leadership in management, and the modern theories of leadership in the corporate strategic management. Next, it compares the present views with the successful management proven by previous experience pointing out the common signs. A telling example is brought of a historic Czech industrial enterprise and its undisputable leader. Findings: The economic recession of the last decade has stressed the importance of leadership as a significant part of the corporate strategic management. Viewed from a distance of several years, this topic should be reconsidered and the situation analysed from different angles. This paper offers the managerial aspect and that of the strategic management in particular. Among others, this is motivated by an effort to find effective models of management that could help avoid economic fluctuations and subsequent political disturbances in the future. Conclusions: The paper’s contribution will consist of a clear analytic material showing the development of the views on leadership and a comparison with a proven successful strategy. Thus conceived, the study may pave the way for enhancing the present theory. It is a contribution to the theoretical level of leadership while also providing a best-practice example.

The transformational leadership is based on charisma of a leader and inner motivation of his collaborators (Bass 1997). Its tools according to Bass (1997) and Judge, Piccolo (2004) are: idealized influence (charisma), inspirational motivation, intellectual stimulation and individualizes consideration.

Many big multinational companies strive for having such people whose working style inspires and motivates others. It is seen in such conception, that leadership could be defined very differently. The company Bosch Diesel gives its own interesting characteristic of a leader, where a leader is that who:

Strategic leaders are ultimately responsible for creating vision and value congruence across the individual, unit, and organization levels as well as for developing effective relationships between the organization and environmental stakeholders (Fry, 2003).

What qualities, characteristics and values should a true leader have? Of such, that he gives rise to other people to watch and follow him, without his direct presence and pushing people to do something.

The question still is how do we recognize or identify a leader. Is it someone who is at the highest position in any kind of organization? Or is it someone who possess some characteristics or values that others do not have?

According to Latham (2014) the task of leadership at all organizational levels seems to be getting more and more difficult. He thinks that perhaps too much credit for organizational success and failure is given to leaders, but there is consensus among scholars and practitioners that it is important and it does make a difference.

The number and type of stakeholders exerting pressure on organizations has increased from a narrow focus on investors and customers and now includes stakeholders such as employees, suppliers, and partners, along with the community and the natural environment (Latham 2014).

Creating value for the multiple stakeholders could be done with innovation and imagination by reinventing the methods and systems so they produce more value for all stakeholders (Latham 2014).

Modern organizations must be ambidextrous (i.e., able to execute and innovate) in order to be successful because of the multiple environmental pressures they face and because they must organize a diverse workforce to do this work (Latham 2014).

Discussion about diversity must include a variety of topics. With regard to the demographic curve, it will be at least the subject ageing (Rasticova 2013).

To succeed now and in the future, leaders will have to design organizations with the ability to do both with an increasingly diverse workforce operating in a complex global environment. Leading these boundaryless organizations requires individuals who recognize that people and communities are not just a means to an organizational outcome, but are also an end in, and of, themselves. There is no shortage of advice on how to lead, but unfortunately the validity of this advice varies widely and it is not clear how much of this advice might best be applied to address the current issues given the numerous compounding variables. The modern workforce continues to increase in diversity (on many dimensions), complicating the leadership task in an increasingly global environment. Organizations and their complex global supply chains comprise groups from around the world creating and delivering products to diverse and global customer segments while operating in a wide variety of situations, governing rules, cultures, political policies, and so forth. In addition, these human-created complex systems are increasingly unstable and thus unpredictable, raising risk and anxiety among leaders everywhere. So where does one go from here? (Latham 2014).

As Silva (2014) writes at the conclusion of his article, there are important differences within the academic world and between academia and the outside world regarding basic concepts of leadership. Avolio, Walumbwa, and Weber (2009), and Nohria and Khurana (2010) presented very good recent reviews of the research on leadership. Those reviews honestly pointed out the existence of opposing viewpoints about almost anything related to leadership. Latham (2014) also found an inability for researchers to converge on a universal answer to leadership. The conclusion to be drawn from all this by Silva (2014) is that we have learned a lot about leadership, to the point that we have different approaches and perspectives on this phenomenon. The different opinions that exist about leadership may be due to wrong perceptions, lack of effective research methods, a combination of both causes, or simply to the fact that all those perspectives are right. Maybe the lack of consensus cannot be interpreted as a failure to discover the truth but as the realization that leadership is a complex notion, which even supports opposing viewpoints.

So the question how do we recognize or identify a leader still echoes.

Also Latham (2014) comes to a consistent conclusion that a universal answer on leadership does not exist. The answer could be found only if this phenomenon operates independently of its context, includes measurable variables and predictable relationships. One might begin by working on a meta-analysis of the existing leadership theories. The main limitations of transformational and transactional leadership theories could be, at least partially, remedied by integrating key constructs and concepts from values-based leadership theories such as servant leadership and spiritual leadership. Once this initial step, along with the integration of key concepts from other relevant leadership theories, is complete, researchers can begin conducting research studies that are comprehensive and address the key aspects depicted in the framework for future leadership research (see Figure 1). This “call to action” is for leadership scholars and scholar-practitioners to rise to the challenge, collaborate with practitioners, and conduct grand (comprehensive) research studies that include both the actual contexts, along with a comprehensive definition of success from a multi-stakeholder perspective in order to synthesize what works and eliminate what does not work from the existing field of leadership theory. In short, there need to be theories that explain how leaders can create value for multiple stakeholders, and researchers need to have the courage to throw out the theories that do not. This will require a departure from the established narrow, typically quantitative, approaches to leadership research and theory (Latham 2014). 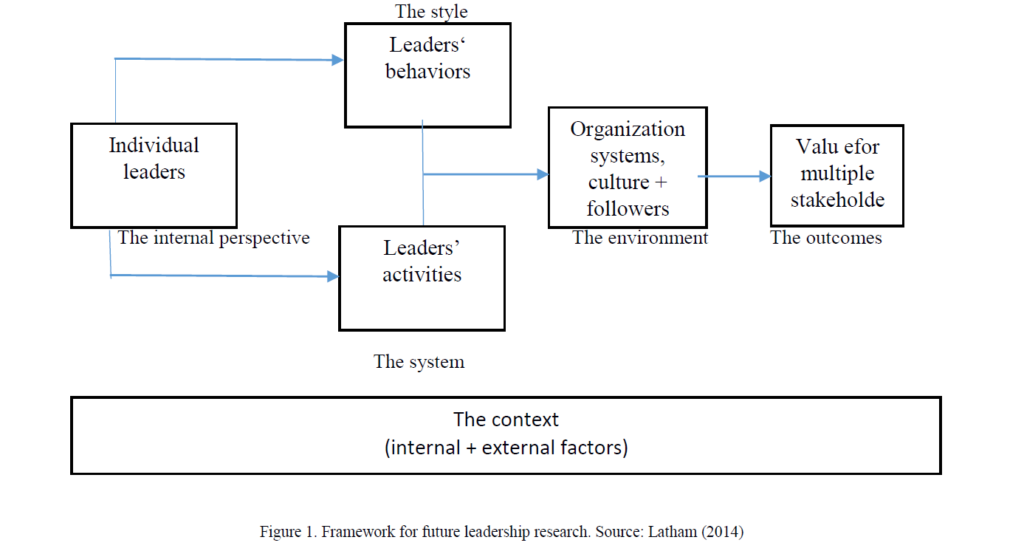 The history of leadership brings stories of successful entrepreneurs, who fulfilled all known and identified characteristics of a leader. Tomas Bata, a worldwide known entrepreneur and founder of the shoemaking empire, is linked with the history of Czechoslovakia.

He succeeded to build up from a small local firm a big international company with implementation of the latest technologies in manufacturing, but also of progressive and modern methods to manage the company and its employees. Even ahead of the Big depression in 1930s he anticipated its possible impact and started to solve future problems with export. He tried to rationalize the production, turned his orientation on easy make products and diversify his entrepreneurial risk in building up own factories abroad and factories that produced complementary products to his shoe production. He calculated pricing always under his competition, founded retail shops in foreign countries and targeted countries outside Europe. From modern research works he brought also new methods and techniques into sales.

In terms of finance, Tomas Bata, just before the Big depression, paid off all his credits and by this the company ceased to be dependent on the banks, that had their own financial problems at that time. The company established its own specific credit system, when their employees themselves were putting off their money on personal employee accounts. Aside of that Bata increased savings on operational capital and strived for their fastest circulation. For its financial stability and independency in the time of the depression, Bata gained admiration of other Czechoslovak entrepreneurs and many people tried to imitate him. It is obvious, that among the most successful followers were mainly his former employees.

At the beginning of the Big depression many Czechoslovak economists and bankers did not believe, that Bata is going to pass through it successfully. The company were hit by the crisis in a relatively good economic condition. Despite of the huge financial sacrifices, Tomas Bata achieved a large rationalization in production and sales, increase of selling capacity and expansion of his affiliated companies in various countries. He managed to reinforce a position of his company in former Czechoslovakia and also in the international shoe business. Due to the depression, the company accelerated its growth and dynamism. This economic success empowered Bata to run business in other industrial lines. The company Bata came out of the Big depression even more reinforced and stronger than any other company in former Czechoslovakia (Tomastik, 2007).

Leadership as a phenomenon that participates on economic success of big corporations is a subject of an eligible focus of economic theory. Scholars and researches are continuously interested in questions like: if this phenomenon is gained or not, how much it takes from education, experiences and to what extent it is an individual predisposition of a person. According to our estimation, the research in this sphere is going to have a qualitative character. We selected the same approach in this paper.