An airline's management strategies in a competitive air transport market

Over the last decade, the demand for domestic and international ﬂights in Korea has increased sub- stantially. To meet the strong ﬂight demands, several low cost carriers have begun to offer ﬂight services. In addition, full service carriers have been motivated to establish their own subsidiary low cost carriers to maintain their market share against rival low cost carriers. This paper studies the management strategies of three kinds of airlines – full service carrier, its subsidiary low cost carrier and rival low cost carrier – based on game theory in the competitive air transport market. Each airline is assumed to act as a player and chooses strategies regarding airfare, ﬂight frequency, and the number of operating aircrafts for speciﬁc routes while maximizing its own proﬁts. Demand leakages between the airlines are considered in the ﬂight demand function according to the selected strategies of all airlines. Through various game situations reﬂecting realistic features, this study provides managerial insights that can be applied in the competitive air transport market.

The emergence of LCCs

After the declaration of the 1978 Airline Deregulation Act in the United States, the market situation of the air transport industry changed signiﬁcantly. With the adoption of free competition, air- lines tried to improve their customer services. They began ﬂight services in new routes and developed various airfare policies to ensure their survival. Various new airlines, including low cost car- riers (LCCs), entered the air transport market to satisfy diverse air transport demands. The concept of LCCs is to offer the ﬂight ser- vices with the attractive prices that are much lower than the con- ventional full service carriers’ (FSCs) and even comparable to those of a car or train. By increasing the number of passengers, LCCs can get sufﬁcient proﬁts even though the unit proﬁt per passenger tends to be less than that of FSCs. In addition, LCCs have tried to reduce all kinds of cost-related elements to secure their operating proﬁts. Therefore, even though they cannot provide sophisticated services as compared with FSCs, the demand for LCCs has increased steadily by passengers who want only a basic transportation function.

The characteristics of LCCs

The fare class structure of LCCs is relatively simple because they only operate one class: Economy and LCCs generally offer two kinds of airfares: Discount fare and regular fare. In addition, they usually provide ﬂight services in point-to-point routes for simple and easy management. LCCs tend to choose lower-tariff airports (Marcus and Anderson, 2008). To get rid of commission payments, LCCs do not use travel agents and adopt the electronic ticketless systems or e- ticket utilizing websites. In addition, they keep a high ﬂight fre- quency to maximize their utilization and adopt team competitive wages and proﬁt sharing to maintain high productivity and efﬁ- ciency (Evangelho et al., 2005). Generally, LCCs’ airfares are 30e40% lower than FSCs’, and LCCs’ operating costs are 40e50% compared to FSCs’ (Doganis, 2001). Through the emergence of LCCs, various alternatives are given to customers when they are choosing their airline, in terms of preference, airfare, ﬂight frequency, etc. Thus, with the remarkable growth of the customer demand for LCCs, it is difﬁcult for FSCs to ignore the LCC market and focus on the premium market.

In response to the steady growth of LCCs and to keep the market share at certain air transport market, some FSCs have developed certain tactics. Some have: (1) Established their own LCC as an internal unit or subsidiary against rival LCCs. (2) Tried to optimize their present operations by cutting off wasteful expenses while maintaining their current business model. (3) Transformed their business model to similar one of LCCs by reducing their current service levels (Morrell, 2005). Among the alternatives described above, this study has examined the ﬁrst one, i.e., the FSC strategy of opening a subsidiary LCC against the rival LCC through a three player game situation.

The current situation of the Korean air transport market

The aim of this study

This study dealt with the airline’s optimal  response strategies in the competitive air transport market by assuming operation situations both under a single route and multiple routes. Ac- cording to the business purpose and the competing environment, four kinds of game theoretic situations are deﬁned. For each, this study tries to ﬁnd optimal values for the airfares, the operating ﬂight frequencies and the number of operating aircrafts of all airlines to maximize their proﬁts. In addition, the demands of all airlines are regarded as a function of both the airfares and their operating ﬂight frequencies.

In this study, it is dealt with the competitive market situation of the air transport industry with a FSC, a subsidiary LCC and a rival LCC, all of whom serve both single and multiple ﬂight routes. It is examined four kinds of game theoretic situations with the case of collusion/competition and the case of a  Stackelberg  game. The demand of each airline is assumed a function of its airfare and ﬂight frequency. The concept of demand leakage is also integrated into the demand function coming from the differences of airfares and ﬂight frequencies among the three airlines. The mathematical model is developed with the objective of maximizing proﬁts, while the decision variables are airfare, ﬂight frequency, and the number of aircrafts in the ﬂeet. To examine each airline’s behaviors under the four game theoretic situations, example problems are solved with the hypothetical system parameter values under a ﬁnite so- lution domain. In the single ﬂight route case, a FSC can make more proﬁts when a FSC is colluding with its subsidiary LCC and posi- tioned as the Stackelberg leader. This comes from the ﬂexibility of strategic decisions. In addition, in Game 4, it can be checked the possibility that if a subsidiary LCC pursues to catch passengers who want to get more careful service but do not wish to pay the amount of a FSC’s airfare level, a subsidiary LCC can be positioned in the market as a medium-cost airline. In the multiple ﬂight route case, a FSC can make more proﬁts when colluding with a subsidiary LCC and being positioned as the Stackelberg leader. When a FSC is competing with its subsidiary LCC, two LCCs concentrate on the medium haul because of its higher marginal proﬁts. However, when a subsidiary LCC is colluding with a FSC, a subsidiary LCC takes the short haul demand to maximize the proﬁts of both a FSC and a subsidiary LCC. As a result, a subsidiary LCC can concentrate on the short haul journeys and a FSC will serve the more proﬁtable medium haul when both colluding and playing a Stackelberg game.

For future studies, it is desirable to reﬁne the objective function of the model to not only maximize proﬁts, but also maximize market share or eliminate competing airlines. A multi-objective function could be implemented. In addition, if I can get real data from airlines or airports, it is needed to validate proposed game theoretic model with real data to derive more useful insights for practitioners. 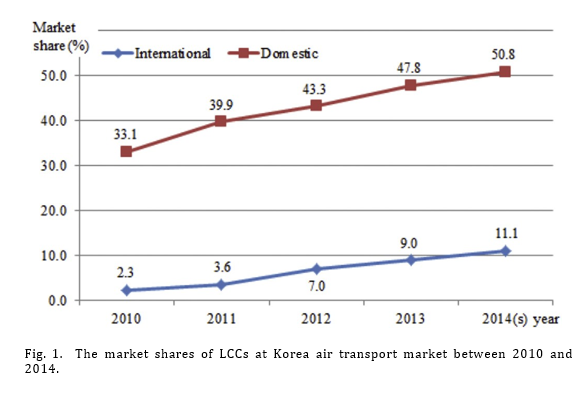